One of the objectives of artistic research is to develop radical new concepts, where art becomes able to express new possibilities, create new texts, shape new practices. Artistic research engages critically with reality and looks for ways to challenge the existing status quo. In the wake of current political and historical vicissitudes, this principle is not only necessary, but also the only possible approach many of us can envision in regard to artistic languages, and more broadly, to research.

Yet tonight you have kindly agreed to participate in one of the most stereotypical rituals you have known in your career of academics and “musickers”: that of sitting at a staged performance, which we hope you’ll appreciate for its intimate setting. However, the concept behind this staging is by itself a speculative act. By placing the artist-researcher at the centre of the operatic production process, En-Gendering Monodrama: Artistic Research and Experimental Production radicalizes the performer’s position in conventional production processes, shedding light on the gender politics implied in its traditional multilayered hierarchy and challenging it holistically through her intellectual and bodily tessitura. This speculative act has been supported by the Irish Research Council and Maynooth University, partners on this journey and to whom I offer my gratitude. 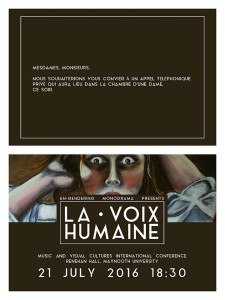 Tonight, you will witness the En-Gendering Monodrama pun inflected quite literally. Our performance will be immersed in an imaginary world portrayed in the works of a few twentieth-century female artists that our artistic consultant and I selected as visual metaphors or oxymora to Poulenc’s and Cocteau’s text. In La Voix humaine, a human tragedy is consumed through a mechanical intruder: the telephone, a correlative objective that played a significant role in the original Jean Cocteau play to which Poulenc set his tragédie lyrique en an acte. Our production contextualizes feminine sensibilities echoing across visual arts and music throughout the twentieth-century, as imagined by Cocteau and Poulenc and embodied by their first muse and demiurge Denise Duval, who created Elle, the protagonist of La Voix humaine. In particular, this performance plugs into research carried out on primary sources as well as drawing on contemporary performance traditions. It especially strives to be a humble homage to its recently deceased first interpreter Denise Duval, whose contribution to the piece was crucial to its moulding both at the compositional and performative stage.

We hope you will appreciate our vision of the piece, and we beseech you to please turn YOUR phone off!

A young woman is having a telephone conversation with her lover of five years.  He has abandoned her and this is the last time they will speak to each other. ‘She’ (Elle) is still desperately in love with him. As Elle’s monologue unfolds, more characters come progressively to populate the imaginary scene we construct through her broken lines and silences. In addition to her former lover at the other end of the line, we picture the presence of the other woman at his side, as we gradually become aware that he is lying about his whereabouts.

Poulenc’s letters show his creative process and close collaboration with Cocteau at the time of the composition. In addition to the lengthy staging directions assigned by Cocteau to the play, Poulenc added a few lines advising the performer on aspects of musical interpretation, advocating her freedom in choosing tempi and dramatic silences. Cocteau directed the mise en scène of the musical monodrama, which was created by Denise Duval at the Opéra-Comique in Paris and subsequently sung at La Piccola Scala in Milan in 1959.

The opera was a huge success. The critics unanimously attributed to the collaborative relationship between the composer and his interpreter, Denise Duval, who influenced the writing of the vocal line and the performance tradition of the piece.