In recent years, the emergence of practice-based and performance-led research has generated dynamic, productive and provocative new forms of understanding in humanities scholarship. Knowledge and experience derived from embodied practices have done much to expand the epistemic fields centred on the body and its place in philosophy and aesthetics. Associated with these developments, topics such as voice, performativity and subjectivity have been transformed and have in turn reshaped contemporary political and social concerns, and questions of human rights, disabilities, inequality, gender, and racial and social segregation. 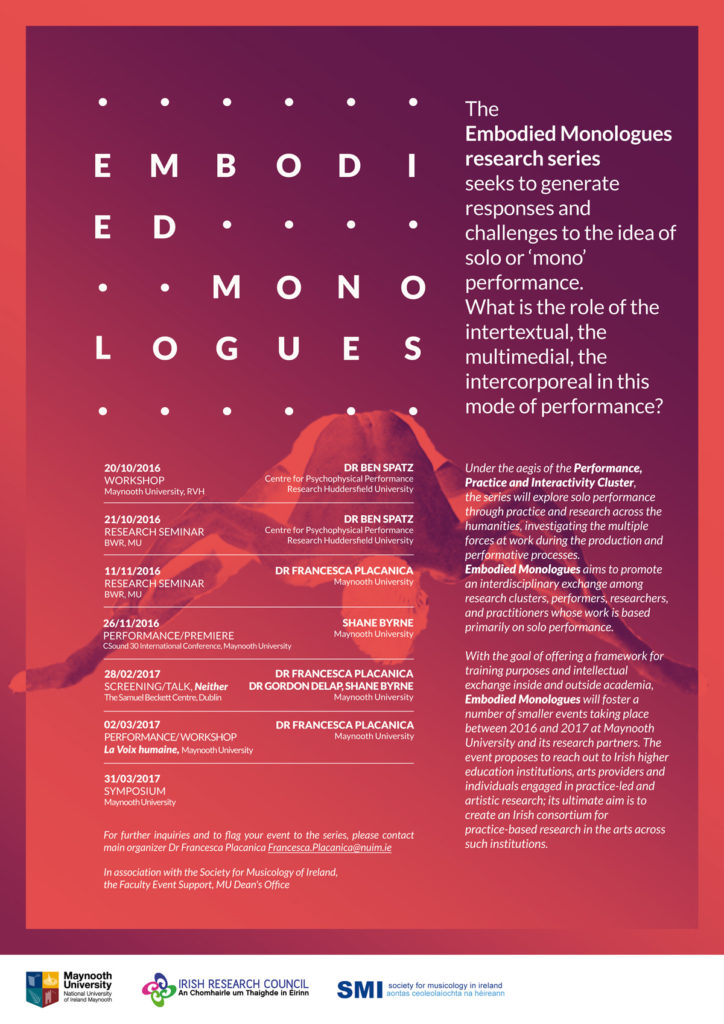 The emergence of movement philosophy and literature especially, as well as a greater emphasis on the performer’s body as predicated in contemporary theatre practices, has opened new pathways for research only recently applied to music performance. As the one and only dramatic figure in monologues and monodramas, the solo performer has unprecedented agency in the dramaturgy and enactment of the piece. Yet even in monodrama, a dramatic genre supposedly condensed into one stage figure, production and staging are still the result of multilayered processes and agencies.

Embodied Monologues seeks to generate responses and challenges to the idea of solo or ‘mono’ performance. What is the role of the intertextual, the multimedial, the intercorporeal in this mode of performance? According to Bakthin’s The Dialogic Imagination “the centripetal forces of the life of language, embodied in a unitary language, operate in the midst of heteroglossia”. In performance, monologues and monodramas demonstrate the dynamics of this notion, combining the individual and the collective, the solo and the dialogical in complex and revealing ways. The series will explore solo performance through practice and research across the humanities, investigating the multiple forces at work during the production and performative processes. Embodied Monologues aims to promote an interdisciplinary exchange among performers, researchers, and practitioners whose work is based primarily—however not exclusively—on solo performance.